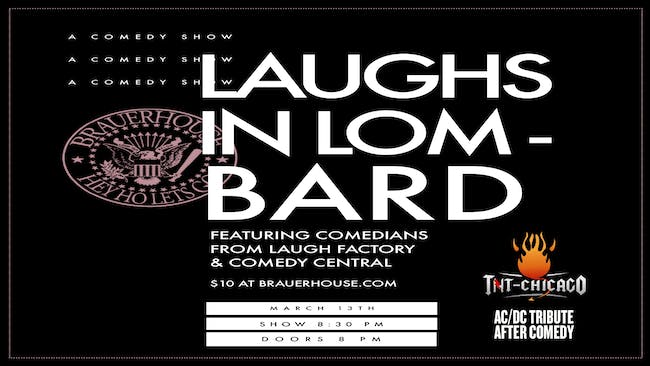 Join us for a night of comedy followed by a late music show! This is a seated event at the BHouse Live venue at Brauer House in Lombard, IL.

Four nationally-recognized comics will be performing on the BHouse Live Stage. Following comedy night will be TNT-Chicago, the AC/DC Tribute Act.

Described by the Chicago Tribune as having "a straight shooting, pull-no-punches style", Joe has performed at clubs and colleges all over America

Kilgallon has appeared on NBC Sports and TBS. His debut album, Pay Attention, opened #1 on the iTunes Comedy Charts and Top 10 on the Billboard Comedy Charts.

Tyler Fowler's witty and clean brand of stand up comedy has made him a favorite around Chicago and across the US. Regularly appearing at Zanies Comedy Club he was recently named among the 'Best Of The Fest' at the Cleveland Comedy Festival. Tyler's debut album Top 10 on the Billboard Comedy Charts.

Vik Pandya is a nationally touring stand up comic based in Chicago. Known for his sharp self-deprecation, observational humor on dating, & hilarious crowd work, his comedy album 'Friends With 401(k) Benefits' debuted #1 on iTunes. Vik has opened for both Roy Wood Jr. & Michelle Wolf and performs regularly at Zanies Comedy Club & The Laugh Factory in Chicago. He was featured in San Francisco’s Sketchfest in 2020, and NBC's Breakout Comedy Festival in 2018.

Need a place to crash for the night? Brauer House Patrons get a discounted rate at the hotel across the street for $69 for a room! https://tinyurl.com/BHouseHotel