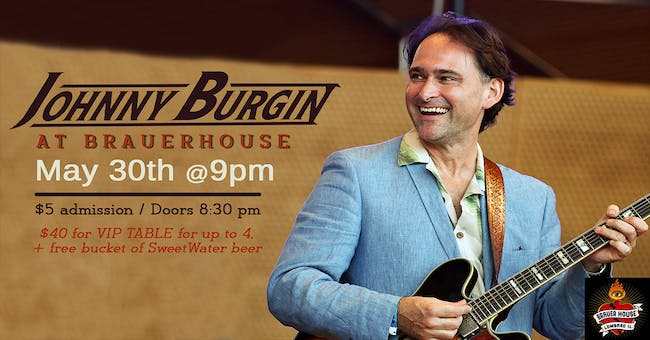 Join us for a night of blues on the bar side at Brauer House with Johnny Burgin!

Johnny Burgin earns his name as The Worldwide West Side Guitar Man by performing up to 250 shows a year in Europe, Japan and coast to coast in the US. Johnny started his career in the rough and tumble neighborhood blues joints on Chicago’s West Side with Howlin’ Wolf disciple Tail Dragger, and went on to tour and record with blues legends such as Pinetop Perkins, Sam Lay and Billy Boy Arnold. He’s been praised by the Cascade Blues Association for his “stunning guitar playing– the pure Chicago styled sound”, and his fans love Johnny’s take on the intense, stripped-down “West Side sound” of Otis Rush, Magic Sam and Buddy Guy. Johnny is a Delmark and Vizztone recording artist with 8 CDs to his credit. He was nominated for a BMA for Best Traditional Blues CD of 2017 for “Howlin’ at Greaseland”, a Howlin’ Wolf tribute.