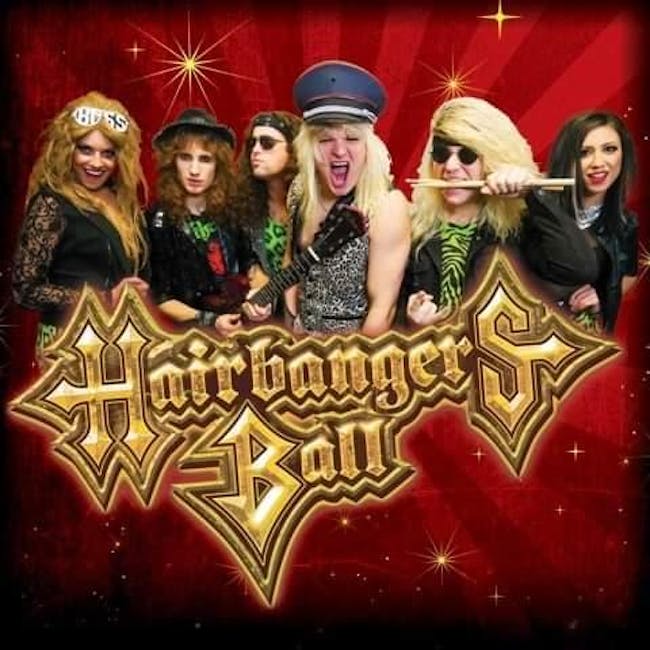 ** Tickets and Table Reservations available via the ticket link in this event. Space is extremely limited!!! **

Hairbanger's Ball: We Came. We Saw. We ROCKED.

Rolling through the “Decade of Decadence” like a 50-ton freight train, iconic bands such as Guns N’ Roses, Mötley Crüe, Bon Jovi and Poison (to mention only a few) made the 1980’s a musical era the likes of which we’re doubtful to see again. Millions upon millions of records were sold, and concert venues around the world sold out within seconds when these bands were announced as headliners…

In 2001, lamenting the heyday of hairbands, one Chicago band sought to rekindle the flame for these Gods of Rock by tapping into the nostalgic and undeniable energy of that bygone era. They called themselves Hairbanger’s Ball.

Born from a “what if?” scenario, Hairbanger’s Ball has entrenched themselves as one of the most sought after “80’s Hair Rock Tribute Bands” in the United States after years of performing sold out shows from coast to coast, all while exuding the same expert musicianship and flair for the theatrical as their idols. Now on the cusp of celebrating 15 years in existence, Hairbanger’s Ball has been a mainstay in music for longer than some of their celebrity counterparts, and routinely perform over 150 shows a year.

Whether you’re looking to bring back the memory of a favorite concert seen in 1985 or seeking a true-to-life representation of what a rock concert was like in the 80’s, Hairbanger’s Ball provides both the music and the mayhem for young and old alike, bundled together in a 6-piece, high octane lineup. Featuring powerful male and female lead vocals, some serious ax grinding and renditions of classic songs so much like the original you’d swear you’d gone back in time, Hairbanger’s Ball leaves nothing to be desired after seeing and listening to them live, and is why they’ve been named “Best Rock Band” in Chicago by their throngs of adoring fans.